You are using an outdated browser. Please upgrade your browser to improve your experience and security.

Lost and found: the adventures of Peter Rabbit

We all have items we cherish. Toys and other keepsakes from childhood can be quite special.

So when Graham Noble lost a hand-made stuffed animal while he was undergoing treatment in a long-term care facility this April, both he and his wife Sharon were heartbroken. 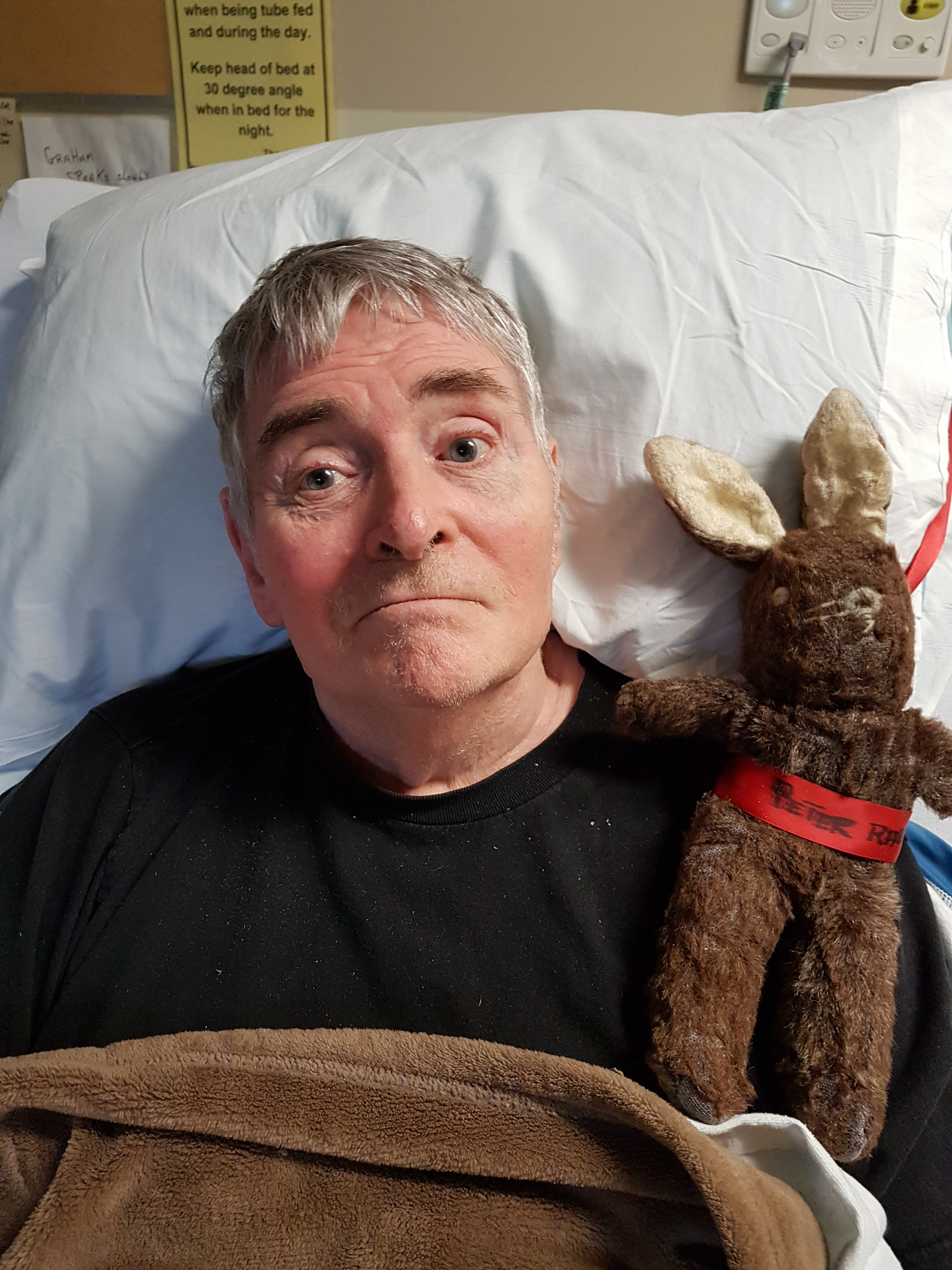 Graham Noble and Peter Rabbit are together again.

“Graham’s aunt had made him a Peter Rabbit before he was even born using an old fur cape,” explained Sharon Noble, Graham’s wife. “After his recent health troubles, Graham asked me to bring him his stuffed bunny. That rabbit has been a part of our family for over 75 years and he’s very important to all of us.

“That’s why I brought Peter in with me to the lodge,” said Sharon. “He would just sit on the side of the bed next to him. It really lifted Graham’s spirits.”

But one day after Graham’s bed linens were changed, the family noticed the rabbit was gone. “No one could find him and, of course, everyone was going mad looking for him,” Sharon said.

It turns out their beloved stuffed animal had been inadvertently gathered up in the bedsheets, which were then sent off to be laundered.

“Once we realized where Peter ended up, we thought we had lost him forever!” said Sharon.

But thanks to Andree Hatfield, who works at the provincial linen plant in Regina, Peter Rabbit wasn’t lost for long.

“When clean linens come out of the washers, many employees go through the items to look for foreign objects,” said Andree. “When they find something, they drop the item into a special chute, which diverts it from further processing.”

Andree was working a normal Sunday shift when she noticed something unique in the chute, something that almost seemed to be looking back at her.

“I could tell it was quite an old toy and was really well-made,” Andree said. “So I picked it up and set it aside. I thought that little bunny must be pretty important to someone. I can’t imagine anyone wanted to part with him.”

Sharon phoned the plant first thing Monday morning, desperate to find the little critter. She wasn’t hopeful he would turn up. But then she spoke to Jackie Belanger, customer service manager at the K-Bro plant.

“Sharon said she was looking for this bunny, and I said ‘Oh my gosh! I think he’s sitting in my office chair. In fact, I’m looking right at him right now,’” said Belanger. “The phone went silent and I could hear her start to cry. I yelled for Andree to come into my office. Soon all three of us were crying!”

“I was so happy they had found Peter that I burst into tears,” said Sharon. “That little rabbit has been all around the world with us and it would have been such a shame to lose him. Thank goodness we didn’t!”

“They had lost track of the bunny on a Thursday, and got it back to them the following Tuesday,” said Jackie. “We’re very happy it all worked out so well for them.”

A value you can’t put a price on

Peter Rabbit (before he went through the washer).

Obviously, Graham is hugely attached to his bunny, and nothing could ever take its place. His attachment to it had grown stronger as of late after a spate of health concerns and setbacks.

One year ago Graham suffered three heart attacks and three strokes, all in one week. It had taken quite a toll on him and his devoted family.

So Graham had sought comfort from an old familiar friend – one who had always been there for him for as long as he could remember. Before Sharon brought him his bunny, Graham kept calling for it, saying ‘bunny, bunny.’

“He got very emotional when he got him back,” said Sharon. “The whole family is so pleased and grateful.”

In fact, the Nobles were so thankful, they sent Jackie and Andree a box of chocolates the day after that phone call to Jackie’s office.

“It wasn’t much but I wanted to do something for them,” said Sharon. “I just had to express my thanks in some small way.

“The only thing different about him since he went through the wash is that he’s just a little less furry than he used to be!”

It’s not unusual for linen plant employees to find all sorts of foreign objects in the wash.

“It happens every day, unfortunately,” said Andree. “From wallets and personal clothing to blankets and stuffed animals, like Peter Rabbit. We work hard to reunite patients and families with their items wherever possible.”

“For me, knowing how important that particular rabbit was to Sharon and her husband made this reunion extra special. I’m just glad we could help,” added Jackie.

In May, approximately 150 personal blankets and items of clothing were found in soiled linens at the K-Bro plant. Labelled items are returned to the originating site so they may be returned to patients.

K-Bro offers a lost and found form. The form includes contact information for the Regina plant. The plant holds onto lost items for 30 days. After that, unclaimed articles are donated to local charities.

“There was another case of a little boy at the Pasqua Hospital who lost his teddy bear," said Jackie. "The item wasn’t labelled but the boy’s grandfather reached out to us via the lost-and-found email address on our form. We managed to drop off the bear at the family’s house.

“Another little girl at the Allan Blair Cancer Centre lost her stuffed toy and we were able to get it back to her at the facility because a nurse there contacted us right away. If we have enough time, we can alert our wash floor crew and perhaps locate the item before it makes it to the tunnel washers. This can help prevent any damage to the item. In the case of this little girl, we laundered her stuffed animal in our small specialty washers and returned it to the clinic before her next treatment."

The provincial linen services team at 3sHealth continues to work closely with frontline staff to prevent foreign objects, including personal items, from entering the laundry system. That way, patients are never without their valued possessions. As well, foreign objects removed prior to the laundering process help prevent the possibility of staining and avoid the risk of damaging equipment at the linen facility.

Peter Rabbit is back with Graham at the long-term care facility in Canora, giving Graham comfort as only he can do.

Heeding Jackie’s advice, Sharon has since stuck a label on the rabbit should he ever go missing again.

“Now he has a long red ribbon that’s fastened around his middle that says ‘Peter Rabbit. Graham Noble. Gateway Lodge.’”

Hopefully, the two friends won’t ever be parted again.